Everything Old is New Again!

I know it’s true that a lot of things go in and out of fashion, particularly in regard to clothing styles. But the latest craze over old vinyl records and record players really has me somewhat stumped. We like to walk around a local flea market on Sunday afternoons and lately we’re noticing more and more people selling bins of old albums and 45 RPM records along with those mono record players that came in a little suitcase, and there’s always a crowd of folks gathered round rummaging through the record bins. A few years ago you couldn’t give these things away if you included a cash bonus to take them!

As someone who has lived through the transition from records to 8-track tapes to cassette tapes to CDs to downloaded tunes, I just don’t see the glamour of these old records. It was such a thrill when we left the days of scratched, skipping vinyl and the worries about albums getting broken or warped. I admit I do enjoy some of the really old authentic scratchy 78 records from the early 20th century but I prefer to listen to the remastered tunes from the Big Band Era and from my generation in the 1960s/70s

Now this is one subject on which I’m sure Stretch and I are in total agreement, and for once I won’t have to be called “so last century.” It sounds like he’s in his den listening to some music right now, so let me go find him and see what he has to say about this . . . 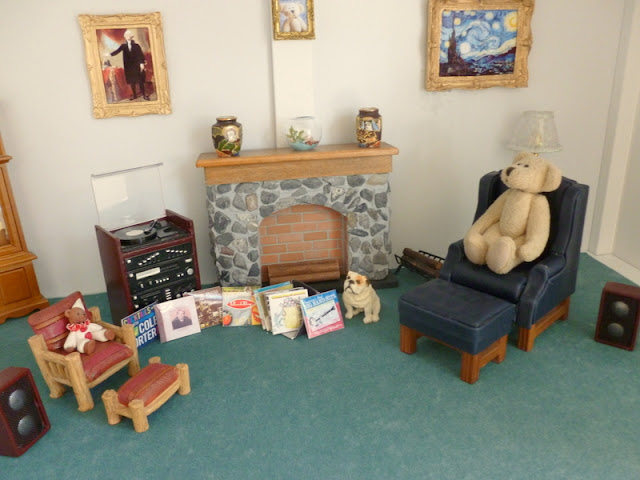 Our save the postcard campaign is continuing successfully. This week Stretch and I received two more postcards from dear friends helping with our campaign.

The first one to arrive was this pic of the Chattanooga Choo Choo train station sent by our friend Wanda. I've been humming that old song all week now--"Pardon me boys, 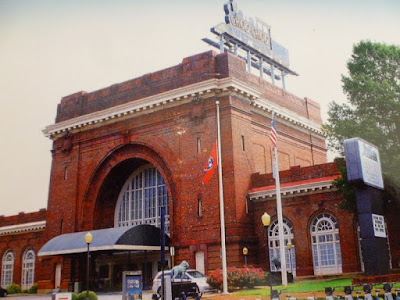 is that the Chattanooga Choo Choo?"

The second postcard arrived yesterday, addressed to Stretch from his dear friend Khadijah. 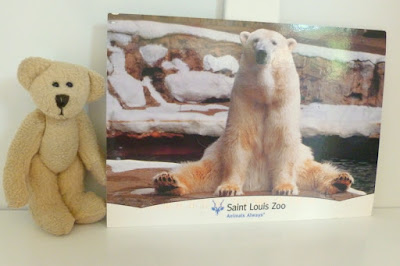 Now Khadijah, I think it was really sweet of you to remember us while you were in St. Louis, but did you have to include that mushy message to Stretch: "I thought of you when I saw the polar bear--he isn't as handsome, of course, and he smelled funny. I like you much more!!"

Stretch has been walking around with his little head in the clouds and I think his ego has reached the stratosphere now.
Posted by Unknown No comments: 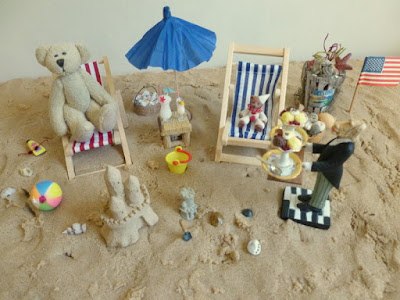 We just want to reassure all those who have been checking lately that we are all fine here and enjoying our summer. In fact, we've been enjoying the lazy summer days so much we've been neglecting our blog. But fans of Stretch who are on Facebook can still see our frequent posts about our daily adventures on my Facebook page.

Meanwhile, we want to thank our cousins and friends for the postcards we've been receiving this summer. Two more arrived in yesterday's mail, one from Kansas from our cousin Martha who's traveling across the country with cousin Yadja this summer, and a second one from cousins Rich and Alice who are vacationing in Hawaii. 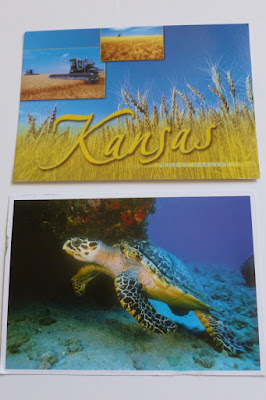 What's that Stretch? Oh yeah, the second postcard was actually sent to Stretch. 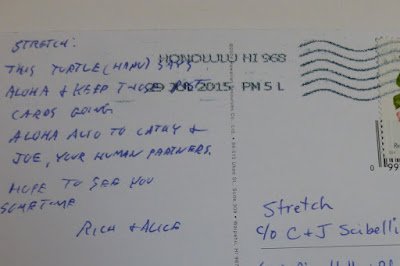 But hey, at least they did include a note to me and Joe! (Life around here with Stretch gets more "interesting" every day.)
Posted by Unknown No comments:

The Postcard Is Alive and Well!

Recently, after reading an article in National Geographic questioning whether the postcard was becoming obsolete, Stretch and I have been waging a “Save the Postcard” campaign and gratefully receiving a lot of support from family and friends. Well, today we’re happy to report that the postcard has been taken off the Endangered Species list.  The latest issue of Nat Geo says that since they printed that story they have received hundreds of postcards from readers, assuring them that the postcard is not going anywhere just yet, except to its addressed destination!

So we’re offering a big thank you to all our friends who also assured us that we can continue to look forward to finding postcards from them in our mailbox. In our blog post today, we’re sharing some of the “interesting” contributions we received. 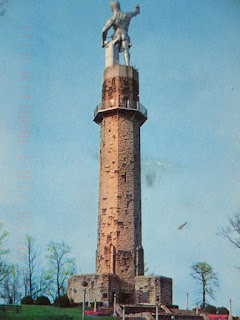 Our new friend Judy Bowlin sent us a vintage postcard of the statue of Vulcan in Birmingham, Alabama. And in one of those weird coincidences, she didn’t know about my mania for world’s fair history when she picked out this card for me. (Vulcan was originally displayed at the 1904 St. Louis World’s Fair.)  And Stretch approves because this statue is fully clothed.

Our friend Wanda sent us two postcards during a recent trek she took to Kentucky and Ohio. And how appropriate to get a postcard from the Christmas Story house during the annual “Christmas in July” mania. It’s almost as much fun as receiving a Red Ryder BB gun. 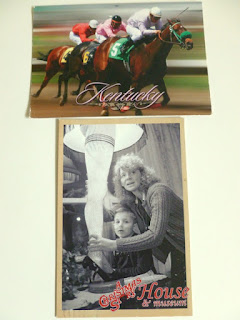 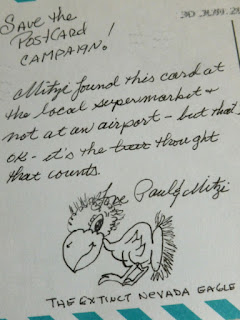 Stretch is still trying to figure out the postcard from our friends Paul and Mitzi. It sends greetings from the airport bar but they claim to have found the card at their local supermarket. It also bears a sketch of a strange looking bird claiming to be an “Extinct Nevada Eagle.” Stretch wants to know what’s in those drinks at the airport bar, he wants to try one.
Cousin Melanie contributed another card from her home state of Tennessee. It’s a nice card with a lot of the highlights of the state on it, but they left out the biggest highlights that Tenn. offers us—fried catfish, hush puppies and banana pudding. 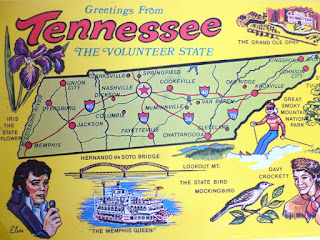 We really love all these cards and appreciate the thoughts that went behind sending them to us.
And I think you will agree a certain cousin has gone above and beyond in her efforts to save the postcard for us. Anne-Marie, we are designating you the Patron Saint of the Postcard! 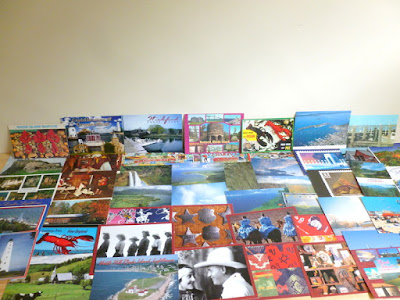 And Stretch would like to thank his relatives for all the cards they sent . . . 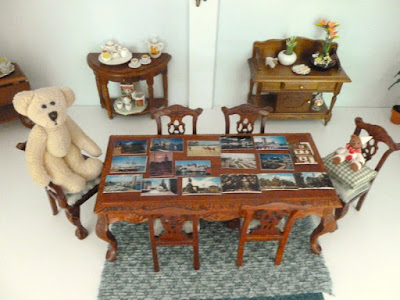 Save the Postcard--A New Contribution and an Old Memory

We’ve been goofing off from the blog lately, blame it on Spring Fever. But now that summer is here, we can’t use that excuse anymore.  And besides, today we have two important things to share. First of all, we’re happy to report another contribution to our campaign to Save the Postcard. 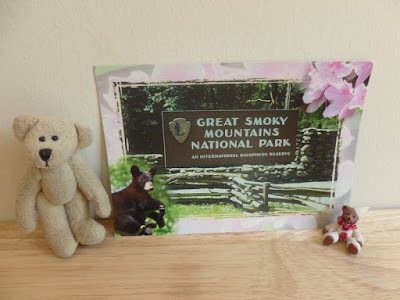 Stretch’s friend Judy Bowlin sent us this wonderful card from the Great Smoky Mountains and Stretch has given this one both paws up for the cute pics of the bears on the front and back. Thank You Judy! 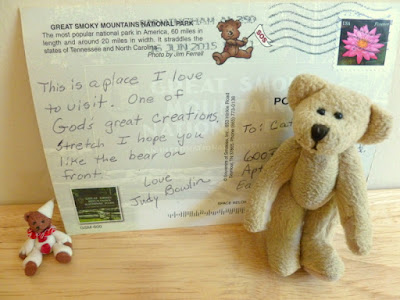 This postcard campaign also has us thinking of little trips we could manage and reminiscing about past adventures.  And today marks an important anniversary we need to share with the express intent of proving to our friend Joanne that we are not total chickens and will go on that Wonder Wheel with her before the summer is over.

Back in my younger days (June 22, 1989) I actually did go on a sort of wild ride—to the top of the St. Louis Arch. For those who haven’t been there, they shut you in this tightly sealed contraption that looks like an over-sized tuna fish can (no windows) and this thing bumps, twists and turns its way to the top of the arch. And when you get there, your husband blurts out one of those things that husband’s always have a way of saying at exactly the right moment—“Wow! This is amazing! Look how high up we are, what a view! And it’s hard to believe there are only a few feet of steel underneath our feet, holding us up here.” 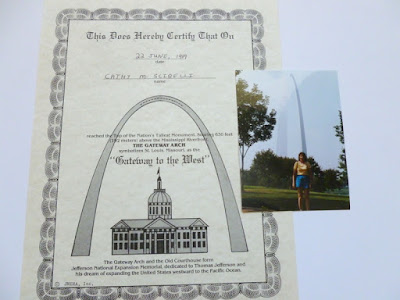 At which point you enjoy another bumpy tuna can ride back to solid ground. 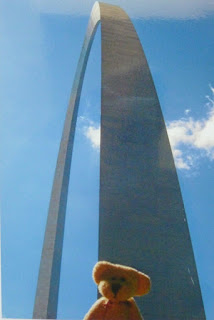 Stretch: I got to see this monument about 6 years ago when we took another trip to the Midwest, but I couldn’t convince my human sidekick to take me to the top this time.

If you’re planning any excursions this summer, whether they’re big trips, day trips or just trips to a local attraction, please contribute a card to our “Save the Postcard” campaign—and make Stretch’s trips to check the mailbox worthwhile! 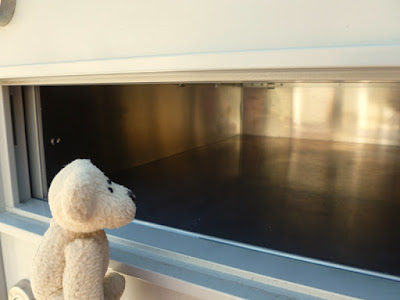 I don’t see any postcards today!
Posted by Unknown No comments:

Welcome to our Blog! 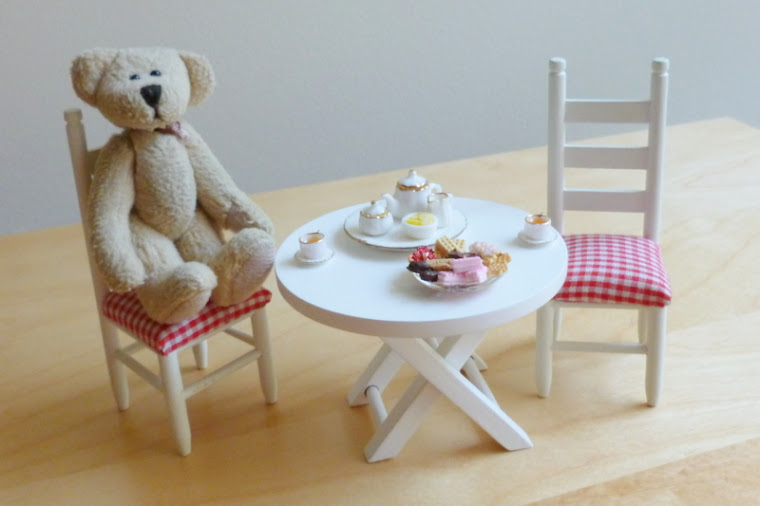 We love when guests drop in!

When I started this blog I called myself the iconic muse as a joke because everything from the 20th Century seems to be labeled "iconic." On a whim, I included my mascot, a 3" bear named Stretch, to help me keep things in perspective with a dose of humor. Somehow the little guy has managed to take over to the point where I now think he has become the iconic character in the blog and I'm his sidekick!
This blog is dedicated to all those who are living with life-threatening or chronic illnesses, and especially to my MBC sisters. I hope our crazy posts make you smile.

Translate to another language

Thanks for Stopping By! 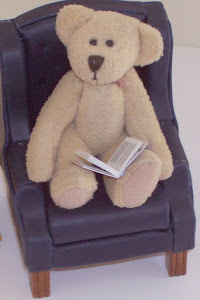